I have shown in an earlier post that a very short krishna paksha as described by Vyasa to have occured just prior to start of war is very much possible. It occured in Sept 2016 and the period from end of Purnima to Start of Amavasya was 311 hours and that between End of Purnima and End of Amavasya (The full Krishnapaksha) was 335 1/2 hours. Both these were well below the equivalent of 14 thithis and 15 tithis.
As against these short periods, I invite Shri. Oak to find out by use of his software the periods which occured in 5561 BCE in the fortnight ending on 16th Oct. This will quantitatively establish the 'shortness' or otherwise of that Paksha and will test his claim in his book that it was short. I have no software so cannot do it myself. Any other reader having recourse to that type of software can also try his hand at it.
Posted by प्रभाकर फडणीस P.K. Phadnis at Monday, September 26, 2016 4 comments:

Saturn and Jupiter troubling Rohini is a problem as they are nowhere near Rohini. It some old posts about fall of Abhijit I had referred to the remark by Shri. Oak that some researchers consider Jyeshtha also as alternate Rohini. Does that surmise apply here too? Are Saturn and Jupiter supposed to be troubling Jyeshtha, alternate Rohini? According to another reference they should have been near Vishakha at the time of war, having gone retrograde earlier and having stayed put for an year (संवत्सरस्थायिनौ, विशाखयाः समीपस्थौ). Shri. Oak does find retrograde motion but does not find them close to Vishakha, but even from where they are, viz. Jupiter at Shravan and Saturn at Hasta, they were sufficiently close to Jyeshtha to cause trouble to Jyeshtha, alternate Rohini. If, in any other year proposed by any other researcher, if Saturn and Jupiter do end up closer than this to Vishakha, they would definitely be causing trouble to Jyeshtha! I invite Shri. Oak to give his view.
Posted by प्रभाकर फडणीस P.K. Phadnis at Saturday, September 24, 2016 3 comments:

There are three positions of Saturn mentioned in the Mahabharata text. 1. विशाखयोः समीपस्थौ उभौ २. भाग्यं नक्षत्रमाक्रम्य ३. रोहिणींम् पीडयते. Prima Facie they appear mutually exclusive, if one is satisfied other two are not met. Shri. Oak actually finds Saturn at Hasta at the start of war as proposed by him in Oct 5561 BCE.
1.I am prepared to accept that Saturn is near enough to Vishakha, giving weightage to the other two points of description of Saturn and Jupiterin the reference, viz. संवत्सरस्थायिनौ and प्रज्वलितौ which are satisfied by both as they went retrograde on either side of Vishakha and were also bright due to retrograde motion. 2. Saturn at Hasta was close to भाग्यं नक्षत्रम् (उत्तरा फाल्गुनि) for quite some time before war date again due to retrograde motion. The use of present tense by Vyasa can be kept aside for the moment.
3. Regarding the third reference of Saturn afflicting Rohini, how to reconcile this with Saturn at Hasta? Shri Oak says in his book that Saturn was 'somewhere in the western sky when Rohini was rising in the east and claims that from that position, it could be considered 'afflicting' Rohini.
It is difficult to visualize what an actual observer would see in the sky, from co-ordinates of Saturn (at Hasta) and Rohini. I show two schematic views of the night sky, one when Rohini is on western horizon and another when Saturn is about to rise in the east. I presume an actual picture can be generated by use of software. My pictures show a view as seen by an observer standing in the open and looking at the Celestial North Pole (no star there in those days)
I invite Shri. Oak to generate similar pictorial views with his software to enable seeing relative positions of Rohini and Saturn as actually seen by an observer. With that, maybe, we can judge his 'claim' more realistically. 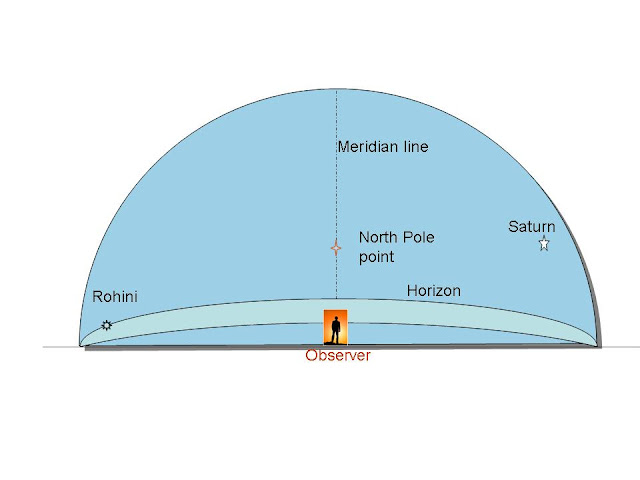 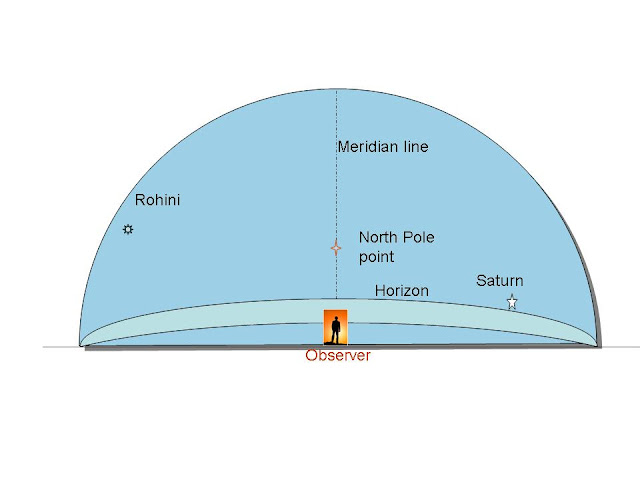 I continued to check for short Krishnapaksha for the following month of Bhadrapada. It shows some interesting features.
1. Purnima is shown on 16th Sept. Purnima had begin at 3-15 AM. It continued for the whole day and ended 35 minutes after midnight.
2. Krishnapaksha began from 17th Sept and continued till 30th Sept. 5 hr.41min. after midnight. Total length of the Krishnapaksha ending on end of Amavasya will be 14 full days and 5 hrs. or 341 hours.
3. The gap between end of Purnima and start of Amavasya (on 29th Sept 3hrs. 41 min. after midnight) is 13 full days and 3 hrs. 20 min. or 315 hrs. 20 minutes.
4. Both these measures of krisnapaksha have shown an increase over the previous month. An interesting feature is that on 21 Sept. both tithis 5 and 6 are shown. There is Tithi lope or kshaya of one tithi in Bhadrapada also as was the case in Shravan.
5. A lunar eclipse is shown on the Purnima - 16th Sept. - but it is only nominal.
6. There are 13 days between Purnima day 16th Sept. and Amavasya day 30th Sept. So it is still a short paksha of 14 days instead of 15 days. Vyasa has said that 14 day, 15 day or even occasionally 16 day paksha is no big deal.
7. The length of Krishnapaksha will now continue to show growth for some months untill it reaches the high point and then it will start reducing. I will look for the NEXT short Krishnapaksha with interest but I do not expect to see a 12 day paksha with lunar and solar eclipses at either end tagged on, anytime in the near future. I happened to land on one last month to my delight.
Posted by प्रभाकर फडणीस P.K. Phadnis at Wednesday, September 07, 2016 No comments: