I now have access to Voyager software. Making use of it, I tried to check the movement of Mars from Magha onwrdas for 'Vakra' and 'apasavya' movement. Readers are invited to take a look at the power point presentation I prepared.
One can see that Mars crossed the Ecliptic twice and also underwent the normal Retrograde-prograde movement at Chitra -Swati. Mars however did not cross Ecliptic at Magha or Jyeshtha as mentioned in Mahabharat but at other locations on the ecliptic. 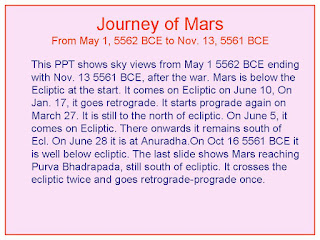 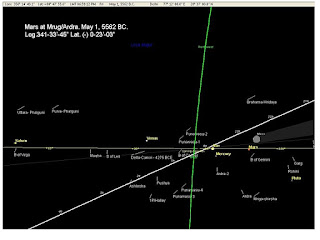 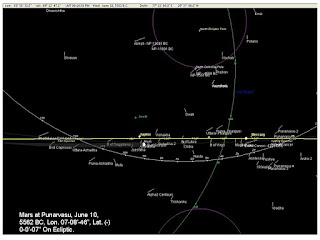 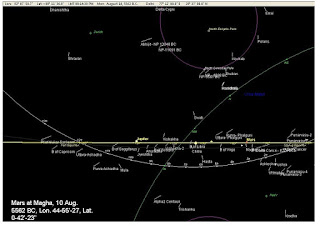 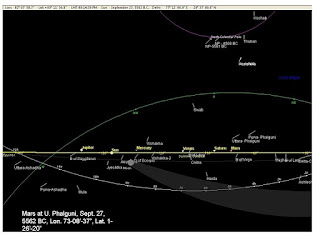 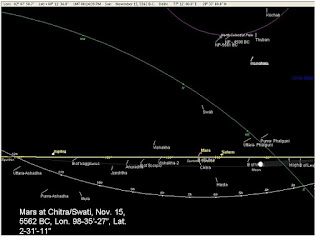 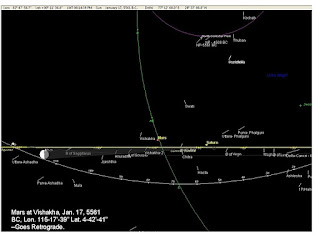 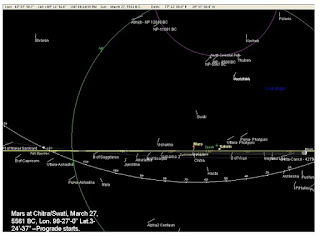 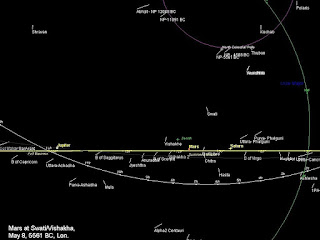 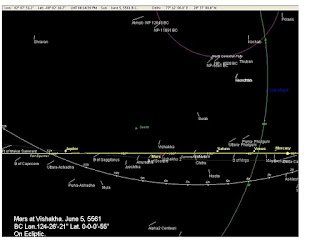 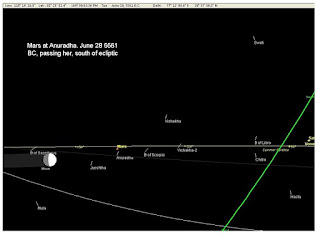 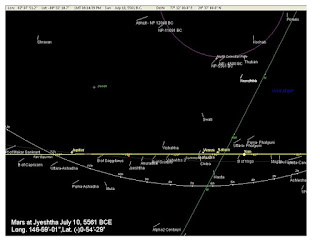 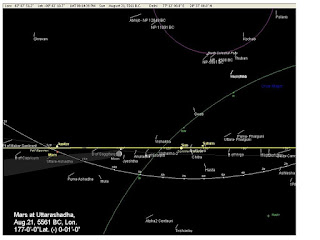 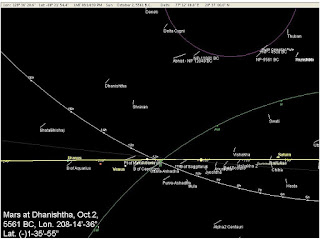 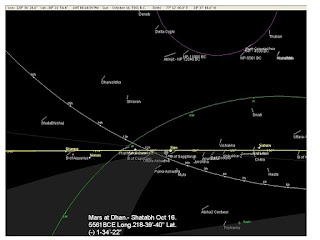 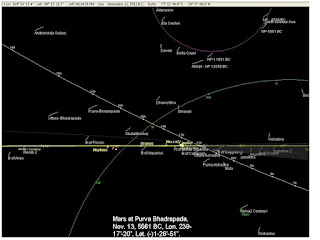 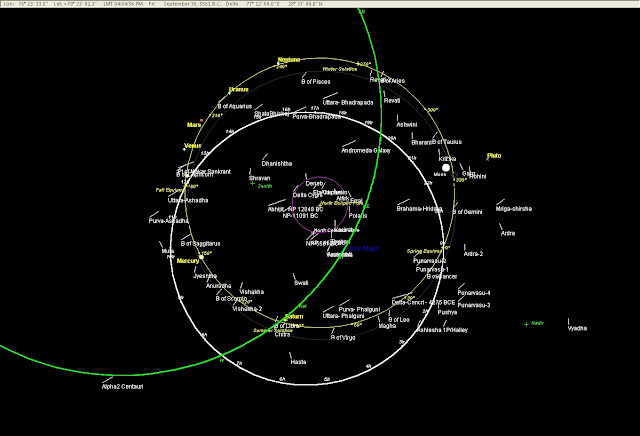 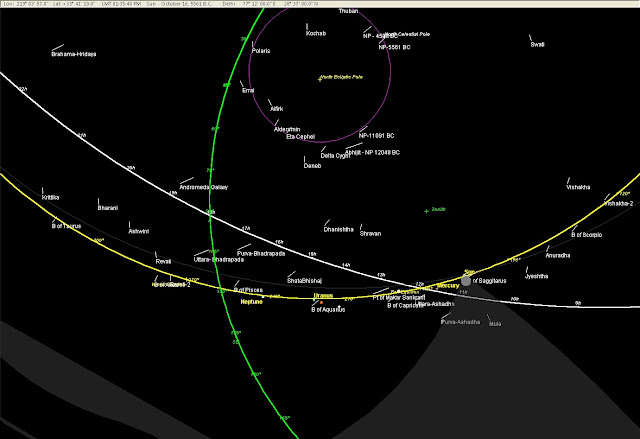 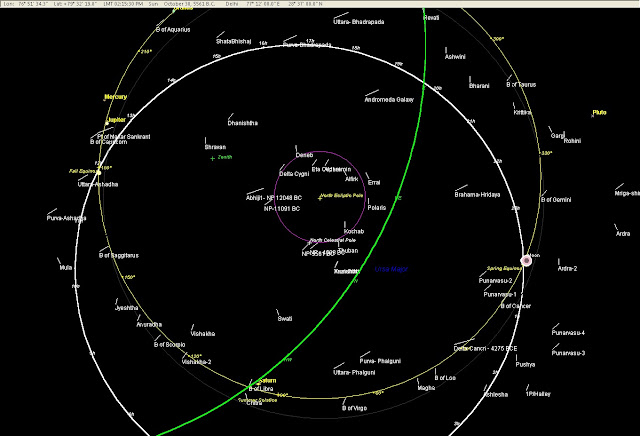 Fall of Abhijit – Some further thoughts.

A lot has already been written by me on the subject, on this blog and in my critical comments on the book of Shr. Oak Translation of ‘अभिजित स्पर्धमाना ...’ was correctly done by Dr. Vartak in ‘svayaambhu’ and he interpreted वन as water, which was very unusual but appropriate in this case.
Shri. Oak , for some reason or other, completely ignored this correct translation and made a mess of his interpretation of the four shlokas in his book.
I have given my interpretation of the following items, viz.
1.Why Abhijit was counted no. 1 and 27 other normal nakshatras followed, with Dhanishtha at no. two, to begin with, when Brahma started year system. 2. What happened later for Indra to say ‘abhijit has fallen off from the sky’. 3. Who was ‘Rohinee’s younger sister, Krittika or Anuradha as an alternative and 4. What finally happened – start of year was shifted from summer solstice to winter solstice and as it was now at Krittika, they got first rank or went to heaven and were brightly shining and abhijit was no longer counted along with the 27 nakshatras.
Upto now, I have also been interpreting इच्छंती ज्येष्ठतां देवी तपस्तप्तुं वनं गता on the lines of Dr. Vartak. i. e. ‘Devi went to water heated by तपः or sunshine. If this was to be interpreted to mean that ‘Summer solstice had shifted to Devi i. e. Krittika’, there was a complete time mismatch! Summer Solstice was much earlier –in 20000 BCE – at Krittika! I therefore proposed an alternative that Devi was the younger sister of Jyeshtha (also called Rohini) i. e. Anuradha and Summer Solstice had shifted to Anuradha from Dhanishtha. That did not shift Winter Solstice to Krittika.
Though Summer Solstice moving to Anuradha helped to judge the time of Indra-Skanda dialogue as 7500 BCE, question remained as to what made Krittika go to heaven ( be happy) and glow brightly.
I now propose a new interpretation of the line.
The word used in the shloka is ‘तप्तुम्’ and not ‘तप्तम्’ So, Devi 'went to water to heat it’ and not ‘went to water heated by sunshine’ would be a more appropriate translation.
So did Devi, younger sister of Rohini, i. e. Krittika go to Winter Solstice, so that water will be heated from the time sun came to Krittika for next six months?
She also wanted to become no. 1 (इच्छन्ती ज्येष्ठताम्), which she would achieve, if start of year was shifted to winter solstice. She was competing with Abhijit for no. 1. She was bound to win, as Abhijit had moved too far from North Pole, had no more relevance and was dropping to or below horizon in every orbit around CNP and so Indra called him गगनात् च्युतं नक्षत्रम्.
That is my interpretation now - ‘वनं तपस्तप्तुम् गता’ not ‘तपस्तप्तम् वनम् गता’
If this is accepted as correct interpretation, the Indra-Skanda dialogue took place when winter solstice had actually shifted to Krittika. From Voyager, I find that the time was 9000 BCE.
The time of the Indra-Skanda dialogue quoted by Markandeya to Yudhishthira was thus around 9000BCE.
Posted by प्रभाकर फडणीस P.K. Phadnis at Sunday, April 23, 2017 2 comments:

In continuation with my own comment on previous post I show below the chart copied from Voyager showing Winter Solstice at Krittika. This was the view in 9100 BCE 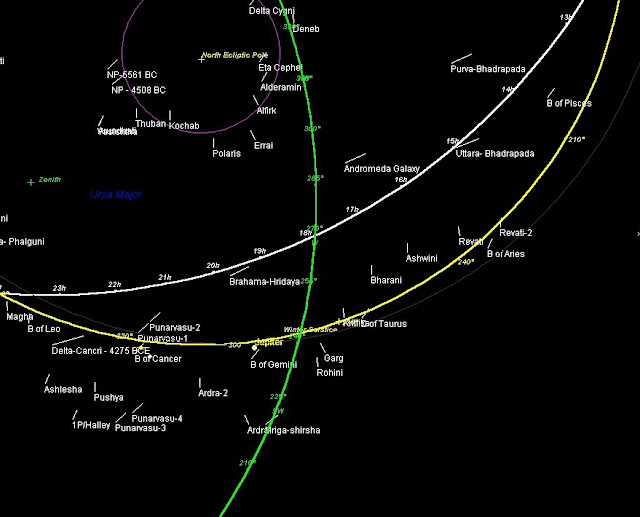 Markandeya had a long dialogue with Yudhishthira when Pandavas were in Vanavasa.
In this dialogue Markandeya told Yudhishthira about the Indra-Skanda dialogue, the subject of ‘Fall of Abhijit.’ At the end of the four shlokas, markandeya said that Krittikas rose to heaven and brightened with pleasure.
Krittikas did that because after Indra explained to Skanda his problem of Nakshatara (Abhijit) ‘falling from sky’ and ‘Rohini’s younger sister going to vana तपस्तप्तुम् ‘and asked him to discuss it with Brhama, start of year was shifted from summer solstice to winter solstice which had shifted to Kritttika by then. So Krittika became the first nakshatra. When summer solstice was at Dhanishtha in 145000 BCE, winter solstice was near Magha. It would take about 7000 years to shift to Krittika. So the time must be around 7000-7500BCE.
Since Markandeya tells this story to Yudhishthira as a long past event, the time of Mahabharata events would definitely be later than 7000 BCE! (Of course it does not positively fix a narrow range of years).
According to Shri. Oak’s finding, the epoch of Arundhati runs from 11000BCE onwards. up to 4500 BCE and technically, mahabharat war could have happened in any year in this range.I have always contended that the initial part of the epoch is only mathematically true in that A was ahead of V but could anyone notice it or be positive about it with naked eye?
Well, we can safely ignore the years from 11000BCE to 7000BCE! Do the readers and Shri. Oak in particular, agree?
Posted by प्रभाकर फडणीस P.K. Phadnis at Saturday, April 22, 2017 1 comment: