On the 18th day of war Shalya became the leader of Kaurava army. Violent battle broke out. Skirmishes between all main surviving warriors on Kaurava side and the Pandavas are described. Till a little after noon, they continued. Early in this description, the following astronomical reference is seen.
भृगुसूनुधरापुत्रौ शशिजेन समन्वितौ चरमम् पांडुपुत्राणाम् पुरस्तात् सर्वभूभुजाम्
Shalya (GP 11-17)
Ganguly translates this as
‘The planets Venus and Mars, in conjunction with Mercury, appeared at the rear of the Pandavas and to the front of all the (Kaurava) lords of Earth.’
To the rear of Pandavas and in front of Kauravas was the Western sky. At this stage of the battle, it was still well before noon. Shalya and others fought vigorously till noon when Shalya was killed by Yudhishthira. Battle continued thereafter for quite some time when Shakuni etc. or all except Duryodhan were killed, Kourava army broke and Duryodhana ran away.
Shri. Oak however interprets this to be an evening situation and finds the three planets ‘behind ‘ Pandavas, in the western sky, after sunset! (By that time there was no Kaurava army, war had ended! Pandava survivors were also disorganized and Bhima was having Gadayuddha with Duryodhana) Yes, the three planets were there in the evening after sunset, Mercury on horizon, Mars and Venus about 30 deg. above horizon. However this has nothing to do with the position well before noon when they should be in front of Pandavas or in the eastern sky! Ganguly’s description is also wrong for the morning hour.
So I checked position in the morning on 2nd Nov. 18th day.
Sunrise was at 6-30 AM
At 7-56 AM Mercury had arisen.
At 10-08 AM Venus had arisen and
At 10-21 Am Mars also arose. 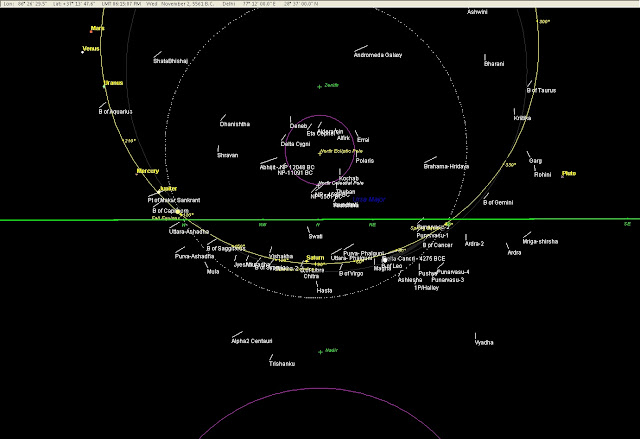 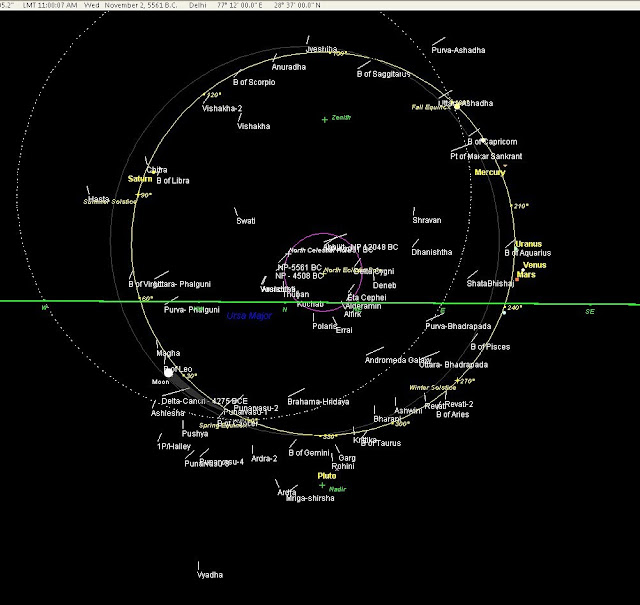 . So thereafter all three were in the eastern sky for at least 2 hours, in front of Pandavas!
(Jupiter is also seen but is not mentioned).
How Sanjaya or Vyasa could see them at 11AM, in bright sunlight is a mystery!
Shri. Oak’s interpretation is irrelevant. The three planets being above western horizon in the evening after sunset has no relevance as war was over, there was no Kaurava army, Ashvatthama Kripa and Krutavarma had run away and Pandavas had chalanged Duryodhana for final duel. Ganguli’s translation is also seen to be wrong.
Posted by प्रभाकर फडणीस P.K. Phadnis at Wednesday, May 31, 2017

Shri Phadnis will do well to read and re-read my books and blog articles.

These questions and his confusion is addressed multiple times.

Shri Phadnis may also do well to do some homework in Tarka-shastra, logical reasoning and inferential thinking to comprehend why his method of criticism of my work (although I have found it to be immensely beneficial and I thank him) is nothing but 'Vitanda-vada'

--
If he search around and still can not figure out why it is Vitanda-vada, I would be happy to provide him references from 'Nyata' tradition of ancient Indian literature.

I have no ambition to become a Naiyayika. Common sense is enough for me. Shri. Oak could have made fresh comments-in short- for benefit of readers of this post, pointing out my factual errors if any. I stick to what I have said here. Three planets behind Pandavas, after sunset, after the war was over, are irrelevant. Whom were they protecting or supporting? They were 'Late Latifs' by then!

This has nothing to do with desire (or lack thereof) of Shri Phadnis and his ambition to become a Naiyayika or not!

I have no intention of spending energy on something that is been discussed before.

The link is here:

The enormous confusion he is creating, at least for readers (for all purposes, he may be clear on what he is doing and stating) is due to his not understanding the difference between Vada (discussion where opposing points of view are mentioned with accompanying evidence), Jalpa (Wrangling) and Vitanda (Cavil).

Shri Phadnis does a fabulous job on Vada (discussion)by providing his position very clearly and also understands the importance of providing evidence in support of his view. He is to be thanked and congratulated for this, a rare occurrence indeed, based on my interaction with numerous critiques, researchers and enthusiasts.

The problem begins (but remains manageable) when he gets into Jalpa (wrangling). This is the outcome of his 'Vitanda (which I will describe below). I do not mind this Jalpa much, because one has to employ 'Abhinavesh' (forceful argument.. that may include making fun of , critiquing, commenting on perceived or real ignorance of the other party, commenting on real or perceived lack of skill (e.g. sanskrit translation, interpretation,etc.).

This Jalpa (wrangling), while irritating, has allowed me (and my theory) much needed resistance and allowed me to see my errors and improve my theory further.

The problem becomes a recurring and unsolvable when Shri Phadnis jumps into 'Vitanda' (Cavil). Here not only he does not recognize that he is doing 'Vitanda' but also refuses to see it that it is 'Vitanda'. Even worse, he sees it as his right!

Of course he is free to pursue his preferred method of argumentation as he sees fit. That is indeed his right! :)

And it is my dharma to point it out for what it is: Vitanda.

I will certainly write a blog article on this subject, since the issue is not limited to Shri Phadnis.

However, here is the brief definition of Vitanda...

(A jalpa (wrangling) which consists in mere attacks on the opposite side (without the demonstration of one of the opposite views) is Vitanda.

I suppose Nyayashatra teaches one, to interpret 'Purastat' as 'from behind' and morning as evening. Save me from it.

I would let Shri Phadnis deal with his own supposition.

However, I will take this opportunity to show how this is Jalpa (wrangling). I will use it towards some new learning.

--
Here Shri Phadnis raise the issue of 'wrong translation'. I have never claimed that I am expert at Sanskrit. I never officially learnt Sanskrit (in a informal or formal setting). In fact whatever little I know is due to my passion for the subject at hand and only as a coincidence, it led me to Sanskrit.

Even then, I have realized that my knowledge of sanskrit is much better ( I have experienced it numerous times) than many so called Sanskrit experts. I attribute the credit of this success of mine to my ability to see the reference in a context. That is all.
--
Back to 'Purastat".

(1) Dr. Vartak refers to this verse (Shalya 11:17) twice and tries to interpret in two different ways and in both cases, does not even refer to 'Purastat'. Have Shri Phadnis tried taking this issue with Dr. Vartak? and if he has, what was the response of Dr. Vartak?

(2) Gita press translator (some Sanskrit scholar of decent repute, we suppose!) translated this verse as "Venus and Mars, along with Mercury, together rose BEHIND PANDAVAS and in front of other kings"

(3) When I was writing my book, the very fact these 3 planets were together was sufficient corroboration for me.. especially considering that I was the first (no other researacher has dared even mention this observation (besides Vartak and Kane)) researcher to corroborate it.

I had used GP translation and since I was treating them as 'visual observations' I selected their timing as that of after sunset (i.e. west)and that matched with erroneous translation of GP edition.

When Shri Phadnis brought it to my attention, I admitted my error, and revisited the reference, in the light of new translation and showed why the reference still corroborates well for 2 November 5561 BCE.

I also stated that this additional insights have implications (plausible) in interpreting eclipses and short Paksha, etc.

The link to that article could be found here where I addressed another baseless accusation of Shri Phadnis....

I have had no contact with Dr. Vartak. I have high respect for his Sanskrit knowledge.
His ignoring 'Purastat' is however not surprising!
Pl. recall 'अव पुरस्तात्, अव पश्चात्तात्' from गणपति अथर्वशीर्श. My own knowledge is limited to 11th standard (SSC in my time)school. That is also rusty. ('निरश्चरो व्यश्चरन्तः 'still is not clear to me.). I have seen that Ganguli is many times not exact in translating. e. g. he translates 'मघाविषयगः सोमः' as 'moon in pitris'. I dont know of any other reliable full text translation available on line.
Shri. Oak has nothing to say about there being no relevance to Three planets at the back of Pandavas by evening of 18th day, as war was already over. On the contrary, in the morning, they were facing Shalya who was proving quite formidable till he was killed by noon. So any protection the planets offered from the front, in the morning was welcome! References should be read with reference to the story.
Time now to stop commenting on this topic.

"I have had no contact with Dr. Vartak. I have high respect for his Sanskrit knowledge.
His ignoring 'Purastat' is however not surprising! "

I could not understand the last line of Shri Phadnis when he states that "His (Dr. vartak) ignoring 'Purastat' is however NOT SURPRISING! Why is this NOT SURPRISING

it is seen that this is really a 6-star system.

Please see the last 2 paragraphs of the article with the link given above.

Question: Does this really matter ?

Also, the practical difficulties of observing the Mizar-Alcor pair is dealt with in
the reference above.