Eclipses at the war –time.

Eclipses at the war –time.
References from Mahabharat Text seem to suggest that there was a Lunar Eclipse on the Purnima just prior to start of war. Although there is no specific mention of a Solar eclipse on the first day of war, some references do suggest that on the first day of waar there was a solar eclipse.
Shri. Oak has proposed 16th Oct 5561 BCE (Julian date) as the first day of war. Voyager software clearly shows that it was an Amavasya day. I carefully checked the position on 16th Oct. for a solar eclipse, whether total or partial, visible at Kurukshetra or not. I could find no trace of a Solar Eclipse at all.
1. Sunrise that day was at 6-17 AM.at Azimuth 82 deg. 12’. Moon had risen 12 minutes earlier and at sunrise, moon was at Azimuth 82 deg. 45’ and Altitude 9’. Centers of Sun and moon discs were sufficiently apart and there was no overlap.
2. Checking thereafter during the day, I could find no overlap at any time.
3. At sunset time, moon also set at same time at 6-53 PM, Sun at Azimuth 277 deg. 26’ and Moon at Azimuth 274 deg. 33’. The separation was more than in the morning and there was no overlap whatsoever.
There was thus no Solar Eclipse at all on 16th Oct. visible at Kurukshetra.
2. On 30th Sept night from Moonrise and till moon set at 6-30 AM on 1st Oct. morning, no shadow was seen on the moon disc throughout the night. At setting time moon face was fully visible. NO Lunar Eclipse could be seen on the Purnima just prior to war.
3. On the Purnima, AFTER start of war, on 30th Oct. at the time of Moonrise at 6-41 PM, Voyager showed an indication of a small shadow at the lower edge. By 7-26 PM this indication disappeared. Thereafter moon face was full. Thus the end of a partial lunar eclipse was seen at Kurukshetra for about 45 minutes after moonrise. There is no mention of this eclipse, however, in the detailed description of war on the 16th day, which was the first day of Karna leading the Kaurava army. It is therefore of no relevance.
The Lunar Eclipse prior to war is described rather clearly in Bhishma (CE 2-23, GP 2-23)
अलक्ष्यः प्रभयाहीनः पौर्णमासींच कार्तिकीम्
चन्द्रोभूदग्निवर्णश्च समवर्णे नभस्थले.
References to Solar Eclipse are not so direct but could be interpreted to suggest at least a partial Solar Eclipse in the morning at start of war.
Bhishma (CE 3-28-29, GP 3-32-33) does talk about
चन्द्रसूर्यावुभौ ग्रस्तौ एकमासे त्रयोदशीम्
(First shloka in these two talks about a Short krishnapaksha of 13 days
Fortnight of 30 Sept.-16th Oct. is in fact a long one.)
In any case, Voyager shows no eclipse on 30 Sept or 16th Oct. 5561 BCE.
Jyeshtha Amavasya on 16th Oct. 5561 BCE?
Another curious fact I noticed about 16th Oct. is that it is an Amavasya day but Sun and Moon are seen setting together in Nakshatra Purvashadha and NOT in Jyeshtha! So how can it be called Jyeshtha Amavasya mentioned by Krishna to Karna or Kartik Amavasya? Shri. Oak does so! In fact, on neither the previous one or the next amavasya, moon is seen in Jyeshtha!
Sky views shown below are self-explanatory. 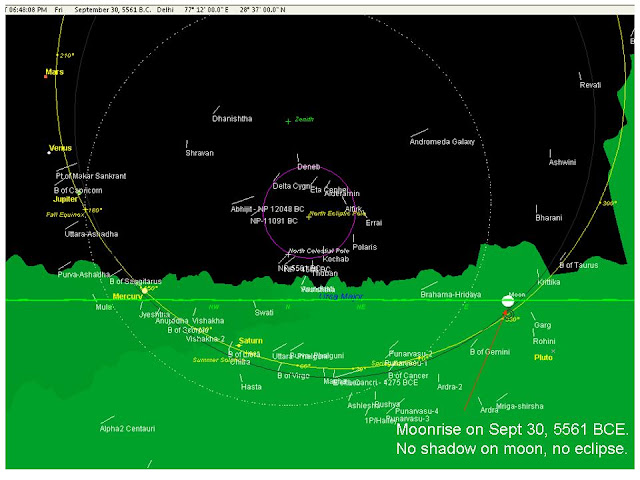 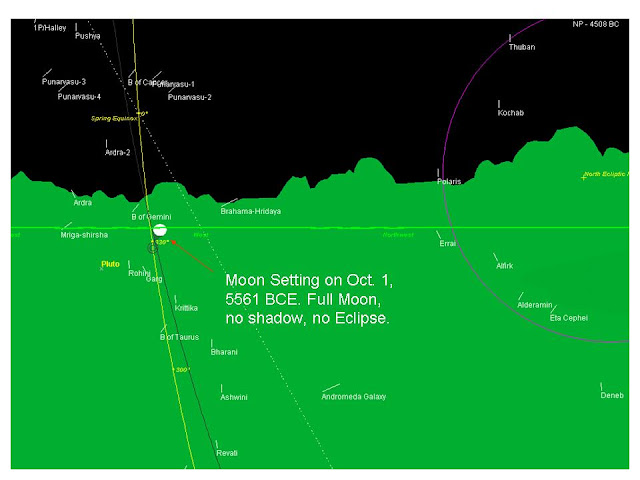 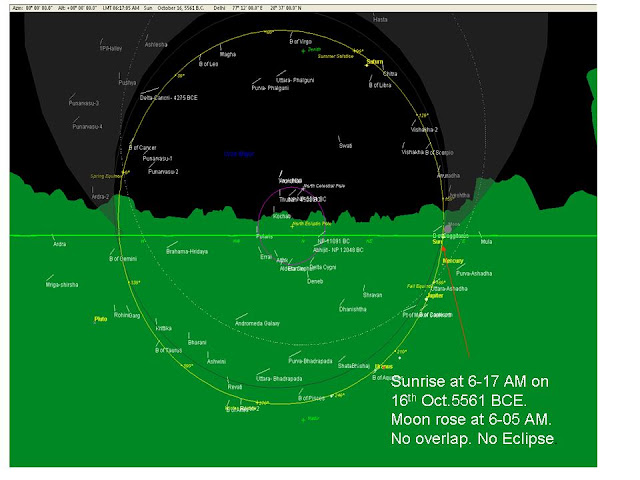 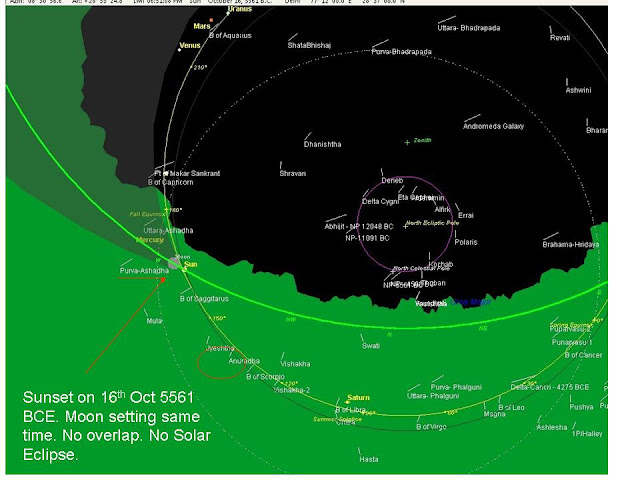