Among the large number of Astronomical references examined by Shri. Oak in his book there is one as under.
मघाविषयगः सोमः तद्दिनं प्रत्यपद्यत
दीप्यमानाश्च संपेतुर्दिवि सप्तमहाग्रहाः
Bhishma (CE 17-2, GP 17-2)
Shri. Oak has completely ignores the first line. He also ‘asserts’ this reference to be describing the position on the first day of the war after sunset. To get a count of seven planets he ropes in Neptune and Uranus. He also says the seven planets were seen ‘near the Sun’ although there is no mention of Sun in the reference. A complete butchering of the reference.
I was curious about ‘moon in Magha’. This being the first day of war and being a Jyeshthaa amavasya, moon should be in Jyeshtha. ( Well, actually it was in Purvashadha!). So why ‘मघाविषयगः सोमः तद्दिनं ....’?
So I looked up in the Text for context. The shloka just prior to this one (first in the chapter) is ..
संजय उवाच
यथा स भगवान व्यासः कृष्णद्वैपायनोब्रवीत्
तथैव सहिताः सर्वे समाजग्मुर्महीक्षिताः
Sanjaya says (to Dhritarashtra) that as Vyasa had said, all kings (with their armies) had gathered (at Kurukshetra).
Reading the two shlokas in the sequence opened my eyes. What Sanjaya says is that the day, the kings gathered, was a Magha day and there were seven planets in the sky shining brightly. The reference is NOT to the first day of war! So the question of seven planets being seen, on the first day, either during the morning because of solar eclipse, as Shri. Oak speculates or after sunset does not arise.
Both parties had commenced mobilization on Pushya day and by Magha day they had all gathered at Kurukshetra and there were seven planets visible (gathered) in the sky.
I checked with Voyager. On Oct. 7th, the moon was in Magha and at the time of moon setting, Sun, moon, Mars, Mercury, Jupiter, Venus and Saturn were all seen in the sky! (No need to fall back upon Uranus and Neptune, which of course, Vyasa could never have seen with naked eyes, whatever Dr. Vartak or Shri. Oak may claim). There was no Solar Eclipse on that day.
Shri. Oak many times sees what he ‘wants to see’.
Readers’ views are invited.
Sky view from Voyager for 7th Oct. is shown below. Mars is not lablelled but the red colour identifies it. 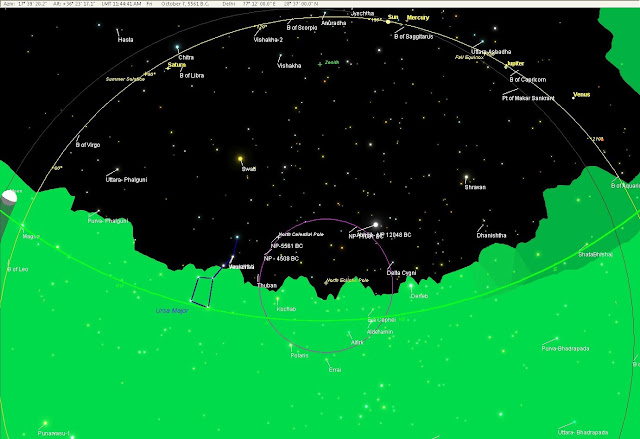 Shri Phadnis is misrepresenting my work in every conceivable way he can imagine.

I would encourage him to read and re-read my book again!

To help him get to the appropriate pages quickly where I have interpreted the references (which Shir Phadnis claims, wrongly, that I ignored them)...

Shri Phadnis will do good to read my boook - Error Elimination -
--
I have already provided identical/similar explanation some 6 years ago (2011) in my book.

Experiment 51(Armies arriving at Kurukshetra on Magha ) i.e in about ~2 days (Pushya-Ashlesha- Magha)

--
Why were these experiments (error elimination) separated? (22 vs. 50 & 51). This was done for the simplicity of narration. I was discussing all planetary references in one chapter (Chapter 7) and then all references (except planetary) related to first day of the war in chapter 8.

Shri. Oak has not mentioned seven planets on Magha day (no Uranus or Neptune needed) anywhere as far as I remember. He has in fact asserted (his own word) that the reference to 7 planets is for first day of war. Well, not so, it refers to Magha day and stands verified. His seven planets on first day of war need Uranus/Neptune -Not Pluto,thank God - to make up 7. Still, all seven are not above horizon. Apart from Dr. Vartak and Shri. Oak, has anyone else accepted that Vyasa could see Uranus/neptune/Oluto?
So I dont need to read or re-read his book. He should re-read my post.

Whether Shri Phadnis wants to re-read (or not) my book is his choice.

Multiple issues. Let's see if we can keep them clean...

(1) Interpretation of Magha reference - as claimed by Shri Phadnis....was done by me in my book (2011).. Error Elimination experiment - 51 (partly based on suggestion of Dr. Vartak)

(2) Ditto for Pushya (again, partly based on suggestion of Dr. Vartak). I say - partly- because while Dr. Vartak suggested it, it does not work for the timeline suggested by Dr. Vartak (He conjectured only 7 days between Krishna-Karna dialogue and first day of war.. as opposed to ~7 days and a lunar month, as conjectured by me)

(3) Shri Phadnis is correct when he says that I did not mention seven planets on Magha day.

My point is the seven plaents I claimed for the first day (16 October) (would be in the same positions - practical purposes) on 7 October!

I accepted claim of Dr. Vartak for these planets, because they are in the positions where they can be employed in corroborating numerous observations of Mahabharata text, specifically (one instance.. currently being discussed - seven planets on Magha day, seven planets going away from Sun on 17th day of the war and seven planets attacking the moon in the evening on the 14th day/evening of the war.)

Nice. Because you want seven star references to corroborate, somehow or the other, you accept Dr. Vartak's proposal that Vyasa could see Uranus, Neptune and even Pluto. Who else has accepted it? Out of three 7 star references, the one covered here, understood correctly as referring to Magha day and not first day of war, does not need them.
About the other two, I will write in due course. They too do not need Uranus, Neptune and Pluto.

Ah! Error elimination experiment no. 51. Yes, I had missed it. Well, here Mahabharat reference quoted is no.80 and not 24. That is why I may have missed it. No. 80 quotes both shlokas. Shri. Oak deals with first three lines only and states that on Magha day all kings had reached Kurukshetra. Nothing about 4th line here. He had already, erroneously, detached fourth line earlier when dealing with no 24 and linked it with first day of war and shown seven stars on 1st day, roping in Uranus and Neptune. Does he now see that the 4th line is also linked to the Magha day when all kings arrived at Kurukshetra? There is a Simile here with all seven planets ALSO gathering in the sky, on same day.

Did Shri Phadnis understand my explanation of why I had split those verses?

Did Shri. Oak take the trouble to read my comment? He may 'assert' for whatever reason, that the fourth line refers to first day of war. But it is wrong.It refers to Magha day. Also after 'asserting' (not ascertaining,) he needed to rope in Uranus Neptune. At least then he should have realized that something is wrong. But no, he has to be right so Vyasa was able to see Uranus, Neptune and Pluto! Jai ho Dr. Vartak and Shri. Oak!
I will now refrain from any further comments on this topic.

"Nice. Because you want seven star references to corroborate, somehow or the other, you accept Dr. Vartak's proposal that Vyasa could see Uranus, Neptune and even Pluto. Who else has accepted it? Out of three 7 star references, the one covered here, understood correctly as referring to Magha day and not first day of war, does not need them.
About the other two, I will write in due course. They too do not need Uranus, Neptune and Pluto."
--
My repsonse

(2) The Planets (Uranus, Neptune, Pluto) were in the sky at the positions described by Vartak for 5561 BCE and their existance/recognition was useful in corroborating 3 references of Mahabharata text.

This is precisely the reason I accepted it. There is nothing hidden about it.

What do you, if any, see wrong in this approach?

(3) What Shri Phadnis may not realize is I had started testing 5561 BCE proposal of Dr. Vartak. So naturally my approach was to go through each of the 200+ references to see what corroborates and what does not. This meant if a specific observation was corroborated per description/explanation of Dr. Vartak, my decision was to accept it (as long as it could be corroborated with the situation in the sky) and move on to the next one until I could find observations that did not match for 5561 BCE per Dr. Vartak explanation (e.g. Bhishma Nirvana day and duration, Mars, Venus & Mercury on the 18 th day, Jupiter and Mercury on the 17th day, additional observations for 14th night of the war, trying to make sense of Balarama Tirthyatra and many more)

Thus, When Shri Phadnis re-tests my claims and find a better match for another day with improved translation/interpretation etc. that is all welcome. On the other hand, his seeing some sleight of hand, on my part, is his pure fancy.

OK. I am continuing to write about 7 planet days. (I had already written). My question was, why Shri. Oak should endorse Dr. Vartak's view that Vyasa saw Uranus, Neptune and Pluto? Does he agree with Dr. Vartak? Or he does not? Readers of his book would conclude that he agrees. So what exactly is his own view? If he does not accept Dr. Vartak's view, he must say so and accept that in absence of Uranus, Neptune and Pluto, 7 star observations do not corroborate. You cannot eat the Cake and Have it too!

I will repeat my answer, provided above...


"(2) The Planets (Uranus, Neptune, Pluto) were in the sky at the positions described by Vartak for 5561 BCE and their existance/recognition was useful in corroborating 3 references of Mahabharata text.

This is precisely the reason I accepted it. There is nothing hidden about it."
--
The reason I remain careful with my language is to avoid confusion between 'Proof' someone's opinion/view and 'Corroboration".

These are three (or those many) different things.

(1) We do not know if Vyasa knew/saw Uranus, Neptune and Pluto. Of course, we can conjecture. We will come back to this.

(2) Dr. Vartak made a case of Vyasa knowing about these 3 planets (Uranus, Neptune, Pluto).

(3) The objectively testable reality is that these planets (Uranus, Neptune, Pluto) can be shown to be in places for year 5561 BCE, in such a way that they help in explaining/corroborating numerous observations of the Mahabharata text.
--
So, back to the question of Shri Phadnis...

Do I agree with Dr. Vartak?

I understand that Shri Phandis is looking for a crisp answer (Yes or No).

Unfortunately, such simple answer does not exist! (Only Sith lord deals in absolutes!)

But that does not mean a clear answer can not be stated, either.

(1) I agree with Dr. Vartak's conjecture that Vyasa knew of Uranus, Neptune & Pluto.

(2) I do NOT agree with the rationale/logic/positions/theory of Sayana-Nirayan employed by Dr. Vartak and how he arrived at this conjecture.

(3) The positions of Uranus, Neptunue and Pluto are such that they allow/help/satisfy corroboration of numerous Mahabharata observations for the year (and specific days) of Mahabharata war.

This corroborations of specific observations due to inclusion/recognition of Uranus, Neptune, Pluto 'TENDS TO SUPPORT (i.e. CORROBORATES!) 5561 BCE as the year of Mahabharata war.
--
Once that is understood, the next set of questions can be raised, how could Vyasa able to see them? what instruments did he have? If Vyasa knew them, whey did he not assign some distinct names for these plaents? on and on...

But this very discussion assumes (not realized by majority) that one has already accepted the claim of 5561 BCE.

This logical fact is lost on many. This does lead many to go in circles!