Reference No. 25 examined by Shri. Oak is as under
निरश्चरो व्यदृश्यन्त सूर्यात् सप्तमहाग्रहाः (CE 26:34, GP 37:4-5)
I had written about this here and in my book earlier so I will try to avoid repetition.
This is in the description of war on 17th day. Karna requested Duryodhana to ask Shalya to drive his ratha as he felt handicapped with Krishna driving Arjuna’s chariot. Shalya agrees reluctantly but says that as he is a Kshatriya king and Karna is only a Soota, he must be free to say anything, even insulting, to Karna. Then after an exchange of insults, finally Karna mounts the ratha and Shalya starts it. At this time besides many omens etc. this Shloka occurs.
Considering time spent in the exchange of insults etc. this could be considered as about one Prahara after Sunrise. If we note the use of past tense, (पूर्णभूतकाळ), this should be the actual planet state at that time itself. Whether in full daylight the planets could be seen is another matter. In any case, the question of looking at planets’ position after sunset does not arise. By sunset, Karna was already dead and anyway, other bad omens are described at that stage in the Text.
So, I checked the position on 1st Nov. 5561 BCE, 17th day, at morning.
1. At 8 AM, Sun had risen earlier, Moon was about to set, Mercury had just risen. Saturn and Jupiter were high in the sky. Venus and Mars were, however, yet to rise. So 5 out of 7 planets, as normally understood, were in sky. Three, Jupiter, Venus and Mars, were to east of Sun and would follow him keeping same distance, so can be called ‘सूर्यात् निश्चरन्ताः’. Saturn, ahead would also maintain its distance till it set. But not 7 at this appropriate time.
2. After some time, moon would go below horizon but Venus and Mars would rise and the score will rise to five, four following Sun at respectful distance till Sunset. Saturn, the fifth, ahead of Sun, would however set after some time.
3. For sake of comparison, I also checked position at Sunset. Moon and Saturn were below horizon. Jupiter, Mercury, Venus and Mars were following Sun. So score was still Sun + four followers. After Sunset and Moonrise (at 8 PM), score was Moon + same four but there was no Sun to follow. Moon was trailing the Four till they set one by one.
In the evening too, relevant or not, there were no seven planets, maintaining steady distance from Sun or ‘ सूर्यात् निश्चरन्ताः’
So what does Vyasa mean when he says ‘ सूर्यात् निश्चरन्ताः सप्तमहाग्रहाः?
I do not accept that Vyas saw and counted Uranus, Neptune or Pluto. So Shri. Oak’s solution is not acceptable to me.
Did Vyasa count Rahu –Ketu? Sapta grahas can mean 1) 5 planets + sun and moon or 2) 5 planets + Rahu and Ketu! Was the modern definition of Rahu and Ketu as ascending and descending nodes of moon in use then? If not, did they understand Rahu-Ketu as empty stars? How was their position decided? Was Rahu simply just behind Moon and Ketu (being shadow of earth), directly opp. to Sun? I have no knowledge on this. If this is correct, then just after moon set, there were Sun and 5 planets adding to 6, but Rahu- Ketu defined this way, were below horizon! At 8 AM Sun Moon, and three planets plus Rahu (behind Moon) were present, which still add up to 6 only.
If Rahu and Ketu were understood as nodes of moon at the time of Mahabharta, how was their position decided by Rishis like Vyasa? If at that time they were understood as Nodes of Moon they would be (almost) at diametrically opposite positions on Ecliptic all time and in general, one of them would be above horizon, the other being below. If this was how Rahu-Ketu were understood, then in Case number 2 above, that is, just after moon set in the morning, there were five planets, Sun and either Rahu or Ketu in the sky and we get a count of 7 ok. Still, the word ‘सूर्यात्’ calls for 7, other than Sun! If Rahu and Ketu were both, JUST above East and West horizons, then we do get a full count of 7, ‘सूर्यात् निश्चरन्ताः’ and also Sun itself, at least for a short time in the morning, without roping in Uranus, Neptune or Pluto! Alas, Voyager, as I have it, does not show Rahu and Ketu.
We have also to note that Nov. 1 was a Autumnal Equinox day so only half of Ecliptic will be above horizon. So Rahu and Ketu both being on horizon will be, at best, a very short time period. Did Vyasa want to highlight it?
Readers having knowledge of Indian Astronomy should throw light on Rahu Ketu.
Sky views shown below are self-explanatory. 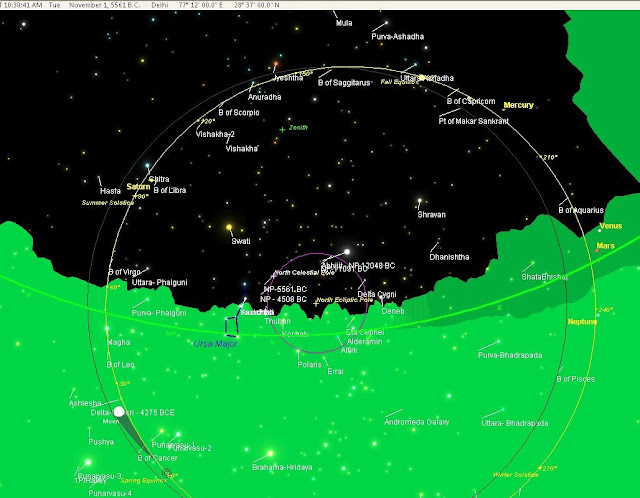 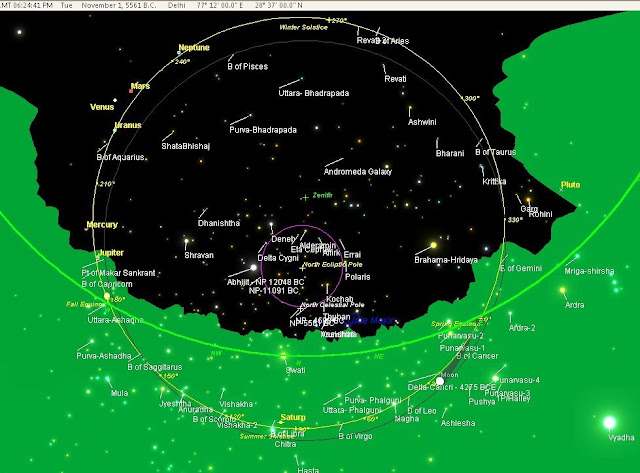 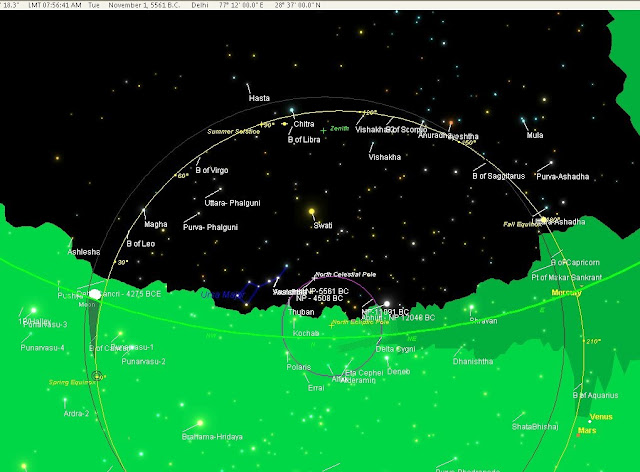 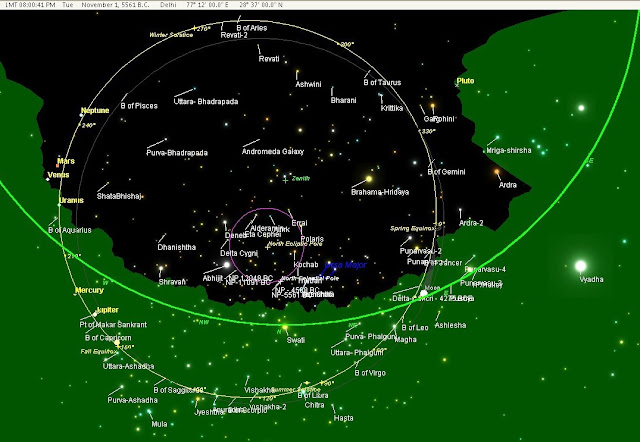 I gave a lttle further thought to Rahu-Ketu. They are not exactly 180 degrees apart. Rahu to Ketu is 50' less than 180 degrees and Ketu to next position of Rahu is also 50' less than 180degrees. Thus rahu jumps back 100 seconds every month and after 18 months goes back one Rashi. (Kalanirnay says Rahu will move from Simha to karaka in 4 months from now!)
Now 1st Nov. is two days after Purnima so moon has moved ahead of Ketu. So on Nov. 1, when moon is setting, Ketu can be about 50 arc-minutes = 200 time seconds behind and Rahu is on Eastern horizon, just rising. For the next 200 seconds, a little more than 3 minutes both Ketu and Rahu are above the horizon, until Ketu sets when only Rahu remains in sky.
For some part of those 50 seconds of time, moon could be above horizon, setting. Moon, 4 planets, excluding Saturn, Rahu and Ketu, total 7, are above horizon around Sun!
Oh how meticulously Vyasa has noted this unique position down!

How much I wish numerous Mahabharata researchers who have boldly and carelessly claimed specific years of Mahabharata war spent even 1% of the time spent by Shri Phadnis in checking their own claims!

Unfortunately, many of them (of course few honorable exceptions that can be counted on finger of 1 or two hands) are/were so eager to be in the limelight, they did not give a hoot to these observations and their validations for respective years claimed.

Thanks to Shri Phadnis for a very detailed analysis. I look forward to his similar analysis for the evening of 14th day of the war, after sunset, when seven planets are described attacking the moon.

Nilesh ji, in this argument by Prabhakar Phadnis Rahu, Ketu are part of 7 tally? Do you endorse his statement?