There is a reference in Bhishma Parva (CE 108-12, GP, 112-12) as under.
अपसव्यं ग्रहाश्चक्रुरलक्ष्माणम् निशाकरम्
अवाक्शिराश्च भगवानुदतिष्ठत चन्द्रमाः
Shri. Oak has interpreted it to mean the moon had downward pointing ends. Ganguli translates likewise
I had so far assumed this translation to be correct. However I now think that it is not correct.
The context of this reference is what Drona told his son and all other Kuru Warriors sometime around noon on this 10th day - ‘I am seeing many bad omens, Pandavas are attacking Bhishma repeatedly and I see great danger to him. We all must protect Bhishma with all our strength.’
According to rules of syntax in Sanskrit, the words get re-arranged as under. (अन्वय)
अलक्ष्माणम् निशाकरम् ग्रहाः अवाक्शिराः च अपसव्यं चक्रुः भगवान चन्द्रमाः उदतिष्ठत.
अवाक्शिराः meaning heads down, being in ‘बहुवचन,’ is an adjective of ‘ग्रहाः’ and not of Moon!
This should be translated as –
‘Not seeing the moon, the planets, with their head bowed down, turned backwards (looking for moon!). ( Later,) Moon rose.
Mercury, Venus, Jupiter and Mars are behind Sun, Moon arose behind them. Till then, the four planets were looking backwards awaiting Moon. Planets looking backwards for moon is a poetic description of the position that moon had not risen so far. Why with heads down? A bad omen suggesting danger for Bhishma!
Assuming war began on Amavasya, this day was Shukla Navami. Moonrise should be after noon. Voyager shows moonrise for 25th Oct to be at 3 PM.
It seems to me that there is no question of moon having down-pointing horns!
Readers’ views are welcome.
Sky view of moonrise on 10th day is shown below. 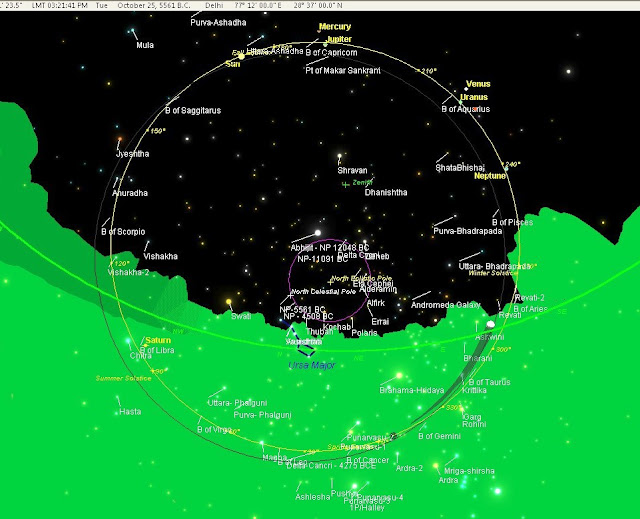